Due to the tides, we had a lazy morning at the hotel, having a slow breakfast before departing for further down the Mekong river system at 09:30. At 11:00 we arrived where we parked at the shoreline. Here, the tide was out revealing a sea of mud and fisherman’s huts perched on poles. The mud looked like it extended out about a couple of kilometers to sea. In places it was possible for people to ride a motorbike out to their huts.

We had no such luxury. This was where Bao and the Norwegian had seen their two Spoon-billed Sandpipers a couple of days before. I had already taken the precaution of covering the lower section legs of my Gitzo tripod legs with plastic bags to protect them from the effects of the mud and saltwater.

I changed into my swimming trunks and left my long sleeve shirt on with a hat and applied liberal amounts of suncream. Not accustomed to walking in mud in barefoot, during which you can sink down to almost your knees, I started by wearing a pair of flip flops borrowed from our hotel room. This soon proved useless since as we entered any shallow water I was immediately held back by the suction on the footwear, so I had to carry them most of the time. They did come in handy on those occasions when the mud was firmer under foot, however. For most of the time, however, I was barefoot – a not too pleasant experience.

Bao led the way, carrying my Leica telescope mounted on his Manfrotto tripod (how glad I was that I had brought my own favoured scope). I followed on, carrying my Gitzo with the Canon 1 D Mark IV and Canon 500mm f4 and extenders. In among the Red-necked Stints and Lesser Sandplovers we initially came across were a couple of birds which turned out to be Nordman’s Greenshanks on closer inspection. On any other day, this would have been fantastic, since they are a species in serious decline. However, we had bigger fish to fry so we soon pressed on with our search.

I had wanted to see the Spoon-billed Sandpiper for many years. I had been disappointed when I had visited Hong Kong’s Mai Po reserve a few years ago not to see them. As in many other of their former wintering and stop over migration places now, numbers of this species are critically low and development of their mud habitat is such that they are one of the most threatened birds on the planet. There may be less than 300 hundred left, and I so wanted to see one before they became extinct.

We walked (well, squelched, slithered and slid to be more accurate) further and further from the shore. We had no luck when scanning through several flocks of small shorebirds feeding or resting on the mud. Mainly these were Red-necked Stints with the occasional Temminck’s Stint and a few Terek Sandpipers.

We took some shelter from the piercing sun under one of the fisherman’s huts. There was a fisherman in his hut above us, which surprised both him and us I think. Bao had a conversation with him about what we were doing. It must have sounded ridiculous to the fisherman. Apparently the huts are only occupied at low tide as it is the way the fishermen use to protect their piece of ‘real estate’ from other fishermen.

We were quite tired now after our exertions and the sun was as hot as ever. We had scanned several flocks to no avail. However there was a flock about 300 yards away which we had not yet scanned. I took the scope while Bao had a rest.

Then, a bird caught my eye. It was in a shallow puddle of water and was bathing, moving around a lot. In the heat haze I thought I saw a beak which was not straight, like the Red-necked Stints, but seemed larger, expanded width ways, towards the tip. I watched it for a few more moments. Yes, indeed! It did seem to have an expanded beak. Not wishing to believe my eyes, I clicked my fingers to Bao standing about 10 yards away, still speaking to the fisherman to come over and have a look. He hastened to the scope and after a second or two he agreed – this was indeed a Spoon-billed Sandpiper! This was an ambition realised, and I had even found the bird myself!

I set about getting some still images and some video. We were a long way away. I had both a 1.4x and 2.0x converter on the camera but even then the images looked very small on the screen of the camera.

We approached closer. By now the bird had left the puddle and was on mud, slightly closer to us, preening heavily.  We walked about 20 yards and stopped for more views and photography. We repeated this, then with no warning, the bird took flight and although I followed it with my binoculars for a while, we both lost it to view. We were both very pleased with ourselves but by now the tide was clearly coming in again so we made our way, carefully, back to the shore. As we got closer to the shore, we came across a couple more Greenshanks – one was an adult Common but the other was a juvenile Nordmans. This time, with the Spoon-billed Sandpiper under our belt, we took more time to enjoy this other vulnerable wader. It had been a great couple of hours.

We celebrated with lunch in a beachside restaurant nearby then returned to our hotel, visiting another pagoda in the town of My Tho on the way.

It was after returning to the hotel that I discovered I had got sunburnt feet – I had neglected to apply enough sun cream here – a salutary lesson for any future birder doing the same trip. 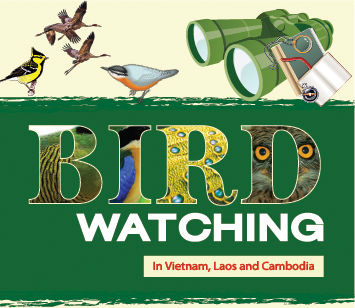